Obris and his cleaning Return

The endproject from my first semester in Games Engineering:

This project had some requirements coming from the university subject:
– It had to be a 3D Platformer
– “Time Reverse” must be implemented and used as an mechanic

Despite the fact that many students formed groups to create their projects, I did this game completely on my own using the Unity Engine and for the 3D models the program Blender. This was done within 3 months.

The game resolves around the intelligent toilet called “Obris”, which was created by the humans, then feared and later banned from earth and shot into space. Obris quite liked the earth though and starts his adventure from galaxy to galaxy take revenge on the humans. With the ability that time is automatically reversed whenever Obris would die, he is unstoppable.
Accompany Obris on his Adventure through four different galaxys divided into 13 levels.

“Obris and his cleaning Return” is a 3D platformer. It also has a huge exploration factor as nearly no game elements are explained. The player must find out the rules of the game by themselves. Each level introduces a new element to be explored. For example, red platforms are soon revealed as death zones which resets the player upon contact. Over the course of the game, more than 15 different colors with different effects or combinations are discovered.

Later on, Obris learns a new ability which requires a decent amount of training. This game in general is quite hard which is why there are multiple difficulties ranging from -5 to +5 with 0 being the starting difficulty.

There are also hidden “Collectibles” forcing willingful players to explore every corner of every level. If you catch a collectible but die before reaching a checkpoint platform, the collectible will reset itself.

Can you beat my personal record and finish the game with under 80 deaths?

Gravitational condition change… The floating object left is a collectible.

[W, A, S, D] controls the player
[Mouse] rotates the camera horizontally
[Hold right mousebutton] allows a vertical camera rotation with the mouse
[U, I] lower/increases difficulty
[P] switches between first-person and third-person view (first-person is harder!)
[TAB] pauses / unpauses game
[R] manually resets the player to the last checkpoint
[N] cheats the player into the next level

The game was selected to be presented on the TUM Demoday. The Demoday is an event in which the best projects of every subject are presented and openly playable for every visitor. 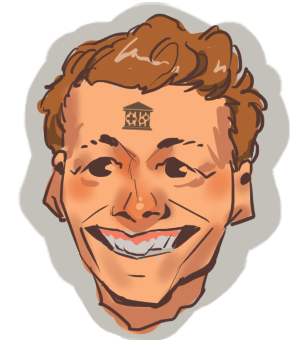